Good News for all you vintage t-shirt fans out there. Thatsmyshirt has just received over 25 new vintage style t-shirts in stock. Stay tuned as they will be posted on the site later this week. We are in the process of shooting another model shoot and once the pics come back they will be posted. Some of the t-shirts that will be on sale are Disney Couture t-shirts, Doe Mighty Fine, Ruby Gloom, French Kitty and more. Look for our new Doe section and Disney Couture Section. We also have many new McDonalds Vintage T-Shirts coming as well..stay tuned...

If you havent already signed up for our mailing list, sign up. Starting in Septemember we will be sending tons of coupons and new release previews.

In other entertainment news, Kevin Federline will be appearing on CSI episodes...why? Who knows.

In Fashion industry Flashbacks. Look what happened on todays date in 1995

Calvin Klein withdraws an ad campaign after drawing wide criticism for mimicking the look and feel of child pornography. Although all the underwear models were legal adults, they appeared to be adolescents photographed in a sleazy motel room
Posted by thatsmyshirt at 5:48 AM 1 comment:

More new Junk Food t-shirts have just arrived including several Batik designs. Pictured is the brand new Junk Food Superman Batik T-Shirt. It comes with a Junk Food Keychain. Many other Batik t-shirts are also available including Felix the Cat, The Beatles and others. Coming soon...Junk Food Hoodies and Yoga Pants.

Want to save some money while shopping at Thatsmyshirt.com? If so pick up next weeks US Weekly Magazine which goes on sale this Friday. There is a Thatsmyshirt.com coupon code in it.

Thatsmyshirt.com's products were included in the Material Girls swag bag that was given to both Hilary and Hailey Duff. The movie is now in theatres nationwide. The bag included very cool Junk Food t-shirts including a vintage Doors concert t-shirt and a Pretenders t-shirt as well as some Disney Couture t-shirts.

Halloween is coming! Look for our annual Halloween costume suggestion guide very soon. The guide gives many ideas on how a t-shirt can be made into a great costume
Posted by thatsmyshirt at 5:41 AM No comments:

Thatsmyshirt.com in US Weekly Magazine, More Signs That 80s Fashion Is Back

Be sure to pick the September 4th edition of US Weekly Magazine as Thatsmyshirt.com will be in it! This is the MTV Awards edition magazine. Look for Thatsmyshirt.com in other magazines as well this fall. We will keep you posted.

You may have heard it over and over by now but 80s fashion appears to be back this fall. Here is another one of many articles that has been in the press that reinforces this belief. Be sure to read Back to the 80s 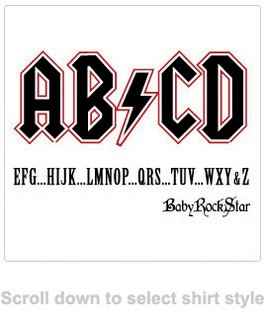 More great news for parents looking for some really cool t-shirts and onesies for their infants and toddlers. Thatsmyshirt.com will be adding Baby Rock Star Clothing to our t-shirt line. They make some really cute rock parody t-shirts that are sure eye openers. Look for them to appear on Thatsmyshirt.com this month. This is one of our favorites called ABCD ala AC/DC.

Thatsmyshirt.com is looking to roll out a fall clothing line and we need good designs. They can be funny, trendy, artistic or anything that basically we like. If you have any ideas or designs please contact us. We pay for designs and always love outside help from t-shirt lovers.
Posted by thatsmyshirt at 5:55 AM No comments:

Thatsmyshirt.com is going back to college this fall. We will be hanging out on several college campuses this fall giving away free parties, t-shirts and more! Feel free to ask us when we may be at your school or give us a good reason why we should come there. If your school group, fraternity, etc. needs custom t-shirts made let us help. Our first stop on our college tour is our Alma Matre, The Ohio State University. Then heading up to the state of Michigan. We are also looking for College Reps to promote our site and products so if you want to be a college rep, please contact us.

We have been getting a ton of press inquiries over the last month. If you are looking to contact us for advertising or press please contact us via email at info at thatsmyshirt.com (sorry about the email address, we hate spam)

Three Six Mafia showing up everywhere. Rap Group Three Six Mafia is back up doing the Hollywood tour. First they made the Glow in the Dark Skull Pile t-shirt that we carry famous by wearing it in a video, last night they appeared briefly on Entourage. Then again everything on Entourage appears briefly. PS - 2 More Episodes and thats the season. Three Six Mafia also has 2 songs that will be on the upcoming Rocky Balboa soundtrack.
Posted by thatsmyshirt at 5:31 AM No comments:

Entourage has only 4 more episodes this season! Say it isnt so. Its true. If you want a sneak preview of what will happen be sure to click here
The good news is the show is coming back for another season and Artie Lang from the Howard Stern show will be involved. Now if they only made the show longer....

Back in 1995 on todays date Jerry Garcia passed away.

Jerry Garcia dies of a heart attack at Serenity Knolls near Novato, California. He had checked himself into the drug rehab center a few days prior, in hopes of kicking his longstanding heroin habit

It's a day we will never forget here as it was the same day our long time company pet Golden Retriever passed as well.

As you may have heard this fall, 80s clothing is coming back. We are not just talking about t-shirts. Supposibly all the 80s fashion trends are coming back. With that being said we want clothing suggestions for our fall line. If anyone has suggestions let us know. We already have many hoodies coming so keep on the lookout.

Speaking of fall fashion. If you have not yet seen them, we received several Junk Food Thermal Tees in. They include The Rolling Stones, Aerosmith and a very cool Wonder Woman Camoflauge Thermal Shirt, pictured. Be sure to check them out!
Posted by thatsmyshirt at 5:37 AM No comments:

We are pleased to announce the addition of a new line of infant/baby clothing. Uncommonly Cute offers some really cute designs for infants and toddlers. Most of the designs are available in t-shirts, onesies and long sleeve t-shirts. You may have seen articles about celebs kids such as Britney Spears wearing their clothing. Here is a picture of one of our favorite designs. This Elmo is My Homeboy t-shirt is so cute!

Remember Mike Tyson (who?). Well if you remember his name was associated to one of the finest Nintendo Games ever, Mike Tyson's Punchout. You can see someone take the road to the Mike Tyson's punchout title right here for old times sake.
Posted by thatsmyshirt at 6:25 AM No comments: