What makes a hero? Radioactive spiders? Escaping an exploding planet? Punching a guy until he gives back the purse? Whatever it is, if he isn’t on s Super Hero T-shirt, he’s nothing.

10: How to Know if You’re a Superhero: Plus, you gotta be able to wear tights.

9: How Superman Should’ve Ended: This is why Supes has the best t-shirts.

8: Lex Luthor has his moments.

7: Finally! A chance for Aquaman to shine!

6: Now that you mention it, Batman is kind of a jerk.

5: Batman’s training doesn’t always go as planned. Just because you have a superhero t-shirt, doesn’t mean you have the powers.

Posted by thatsmyshirt at 8:11 PM No comments:

Video games are like candy for your brain. They’re delicious, but if you have too much they can rot things. Then you’ll be unable to type the pgoaiga;b afjadfj ad;gh g&34 hadsgryfglhgjhglhasd!

10: A gamer’s worst nightmare. Although, this guy isn’t wearing a video game t-shirt, so is he really a gamer?

9: That’s just the kind of mercy my opponents show me in Halo.

6: With the collapse of the dollar, we’ll all soon be spending Mario coins to buy food.

4: If only he hit the keys harder. He would’ve won.

3: It’s a good thing he was playing this game and not Pac Man. He’d just end up back on the other side of the screen when he drove off.

2: This mom is definitely not going to buy him this video game shirt.

1: A reason not to take your controller everywhere. This never would’ve happened if they had played Donkey Kong.

Posted by thatsmyshirt at 9:55 PM No comments: 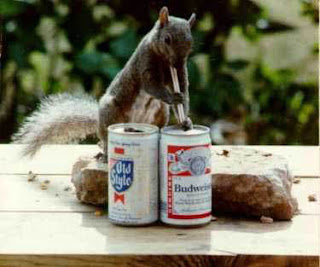 Whether you drink Dosequis or you are still wearing a distressed Schaefer beer t-shirt, everyone loves a good beer and a good beer commercial.  It's too bad that their aren't that many funny beer t-shirts.  If only the t-shirts matched the funny commercials.  I still miss the Bud Ice Doobie Doobie Doo Penguin t-shirts that we once had.  We have tons of cool Beer t-shirts, just not very many funny beer tees.

10: Guinness: It’s the sort of beer you should share.

7: Heineken: It’s good he waited because it would be hard to do all that stuff drunk. Maybe he was hoping the waiter would find a Guinness.

5: Beer Heaven: It’s like regular heaven, only drunk. You’d think real beer heaven would have something other than Miller Lite to drink.

4: Bierbitzch: It’s all in how you order and tip.

1: Budweiser: The King of Beer Commercials. My dog still hasn’t learned this trick. He keeps coming back with Olde English 40’s.

Posted by thatsmyshirt at 6:28 PM No comments:

Okay, okay. I've heard enough awful reviews. I no longer want to see Sucker Punch.
Everyone I've talked to who has seen the movie has told me that it was bad. Not just bad, but TERRIBLE! My cousin actually said it was the worst piece of shit he's ever seen. I must say, I am very disappointed. When I first started seeing stuff about Sucker Punch I was intrigued. I like Zack Snyder from his work on the 300 and Watchmen (check out our movie tee shirts!), so that was a plus. The first trailer I saw seemed pretty cool. It was one of those movies where I was like, hmm. Maybe I'll check it out.

We all make bad decisions in life.
Then came the later previews. There were the tv spots that have been running that featured the song Panic Switch by The Silversun Pickups (very underrated band). Pretty cool song, made me pretty hyped to see the movie. In all honesty though, the real reason I wanted to see this movie so bad was one song in particular:
When the Levee Breaks, by LED FUCKING ZEPPELIN!!!
I have always been familiar with Led Zeppelin (we've got Led Zeppelin tees), but I didn't really start to get deep into them until a few years ago. When I first heard When the Levee Breaks, I played it on repeat about five times. It automatically made me want to kick someone's ass. I was so hyped. I remember telling my girlfriend, "this is like the perfect song for a barfight scene in a movie." I racked my brain trying to think if I had ever heard it in a movie, but I came up with nothing.
So when I went to the movies a few months ago, and the into to Levee Breaks came pumping through the speakers, I lost my fucking mind. SOMEONE FINALLY USED IT! I was so hyped. It's the same way I feel about the Chemical Brothers song that plays during the previews for that Hanna movie that is coming out next week. That song gets me pretty pumped too (search our cool stuff).
Unfortunately, the reports of how shitty Sucker Punch is have diminished my excitement since then. I still have hope for Hanna. I guess maybe I should have different criteria for which movies I get excited to see, but I can't help it. Sometimes the music just gets to me.  We will carry Sucker Punch Tees as they are in demand around here.
Have you ever wanted to see a movie based on the music in the previews? Am I the only idiot?
Posted by thatsmyshirt at 8:18 PM No comments:

Comedy and violence: They go hand in hand like an anvil perched over a coyote. But which one wins out in the movies? We take a look at these two classic movies and their classic movie t-shirts.

Timeliness: Pulp Fiction is definitely the new movie, but Caddyshack has endured over these many, many years. Can anyone take golf seriously since that movie?
Winner: Caddyshack

Design: Not a tough call here. Caddyshack’s design is meant to be retro and the golf club was stuff. Pulp Fiction was all about the design and the look and one Bad Mother--- Shut your mouth!
Winner: Pulp Fiction

Characters: John Travolta and Samuel L. Jackson are awesome, but it’s more about their star power than then. I mean, Vincent could just be Vinny Barbarino later in life. The characters of Caddyshack, however, are unforgettable. No contest.
Winner: Caddyshack

Although I think Caddyshack is the better and more enduring movie, I think Pulp Fiction wins the T-shirt competition. You can’t find a better design for your movie t-shirt.

Posted by thatsmyshirt at 5:35 PM No comments: